PowerISO is a program that allows us to copy, create, and edit ISO images.

CDs, DVDs and Blu-Rays can be saved in a single file on the hard disk. That is to say, the content of the Disc will become a .ISO file (or other extension). For example, we can convert any Blu-Ray movie to a ISO file called “movie_4.iso”. This file will contain all Blu-Ray information. To create and manipulate this type of files it is necessary to use a specific software. 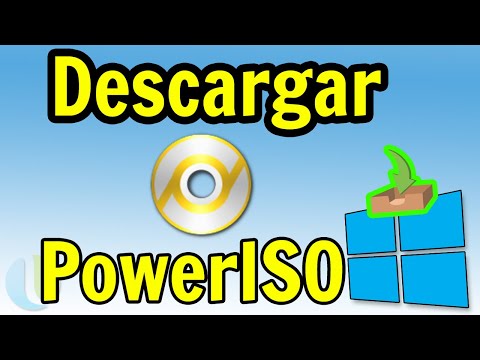 PowerISO is capable of handling the vast majority of CD/DVD/Blu-Ray image formats. Among others, it recognizes following formats: .iso, .daa, .bin, .cue, .mdf, .mds, .ashdisc, .img, .cdi, .nrg, .dmg, .vcd, .vmdk, etc. This means that we will be able to open any of those file and manipulate the content.

This software deals with disc images as if they were compressed files. That is to say, we can open disc image and see all files and directories on the disc, remove them, delete them, or add new files. It also allows the extraction of the contents of the images with a single click, so that the content of the image will be saved in the directory that we specify.

With this program we can create Disc images from existing files. It will be like to create a compressed file. We will select the files we want to include and save it as .ISO file. We can create different types of images, such as: data CD/DVD, DVD UDF, Audio CD, Video CD, Super Video CD, and more.

Another interesting tool is the CD to MP3 converter. Thanks to this utility, we can extract an audio CD to MP3, FLAC or APE. Being able to do the reverse, that is to say, create an audio CD from MP3 files, FLAC or APE.

With this software we can create up to 23 Virtual Drives, and “mount” the disk images on them. For example we can create a Virtual Drive named F:, and “insert” DVD, CD or Blu-Ray image on it. In this way, Computer will read F: unit as if it's a real Disc and not an image file (.iso or other) in the hard disk.

We can create “bootable” USB drives, that will allow to start the Computer from the USB drive created with this program.

As we see PowerISO is a very complete solution that goes beyond the manage of disc images, and also allows disc burning, virtual drives emulation, and more. Thanks to this software we'll not need to install several programs to perform different actions.

We must pay attention at installation, as this software tries to install “Potentially Unwanted Software”. To avoid this, on the screen where it asks if we want to install “Search Protect”, we will press “Skip” button (if you press “Agree&Install” button it will install a program that has nothing to do with what we want to install).
In the next window we should choose “Custom (advanced)” and uncheck the box that says “Install TuneUp Utilities 2014”.
By doing these two actions we will avoid installing additional and unnecessary programs.

The software was launched in the year 2004 and to this day continues to be actively developed. Is paid software and software's demo is limited and only allows us to edit and create images of less than 300 Megabytes.