MiniDOOM is a 2D platform game that combines the elements of the original Doom 1 game and Megaman.

If you played Doom 1(1990s), that was developed by ID Software, and you liked the game, for sure you will also like this MiniDOOM videogame, because it brings some of the most characteristic elements of Doom 1, and puts them in a 2D world where our goal will be to finish with all the enemies. 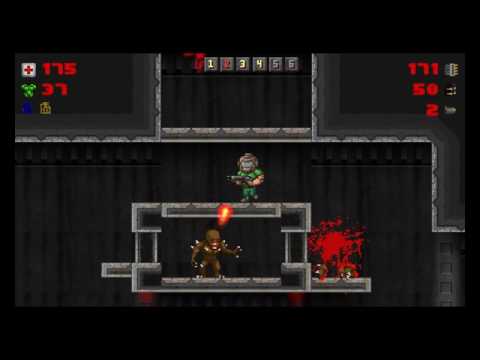 The game mechanics are very similar to Megaman of the NES, where we will have to advance through the platforms of different levels, dodging and shooting enemies onscreen.

In this game we will find many elements of the classic Doom: the armor, medikit, colored keys to open the doors, typical Doom weapons, and of course, the cast of enemies that appeared in the first part of the legendary Doom.

Graphics are very well crafted, and the animations are equally great. Giving to this indie game a very pleasant and appetizing appearance.

Music is another very important aspect, because it includes the original Doom 1 music, it makes the game even more exciting, because the songs chosen that accompany the different game levels are composed of powerful electric guitars. This will make you come back and have the feeling that you're playing Doom 1, and certainly it will bring you more than one memory of the first time you played that awesome classic game.

The game has two levels of difficulty, having the simplest level enough difficulty to test your abilities and skills.

MiniDOOM is composed of 5 phases, you'll have finished all of them without leaving the game, since the game doesn't include the option to save the game, making it even more challenging finishing the game.

When playing we can choose different controls, being able to choose between different keys on the keyboard or combine the use of the keyboard and mouse. Although nothing prevents us from using a program such as JoyToKey to map our favorite Gamepad to the keyboard keys and play the game with any PlayStation or Xbox gamepad.
Controls are very simple, we will have a button to jump, another to shoot, and other two buttons to change weapon (one to switch to the next weapon and another button to switch to the previous weapon), and of course the 4 arrow keys to move our character.

The game is for Windows and is completely free. This game has been developed by the Spanish indie videogame study called Calavera Studio.